A Tribute to Lonnie Robertson Vol.1 - an EP from Williams & Mackey 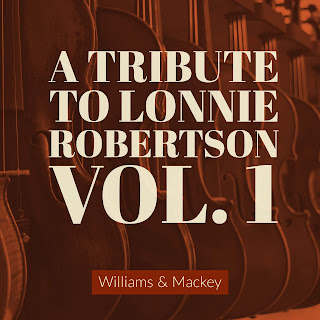 I've lived, loved and played regional Missouri fiddling for well over thirty years.  Lonnie Robertson rekindled the spark I didn't know I'd lost when it came to playing music.  I don't know what rock I'd secluded myself under for all of those years but once I heard his recordings a few years ago (with countless thanks to my long time fiddling partner in crime, Angie) it knocked my hat in the creek and I've been, as some might say, obsessed.

My good friend, Robert Mackey, was hooked as well as soon as he'd heard Lonnie's self produced recordings and the field recordings Gordon McCann had done in the 1970's and early 80's (available on YouTube).  We traded new tunes over email for the better part of a year. I'd record the fiddle part, email it over and he'd lay down the guitar track sometimes even adding in upright bass and banjo on a few and send the finished file back.  Robert started calling it, "The 90 Mile Tour" after awhile since we live several counties away from each other.

We hatched a half crocked plan over a few beers here at the farm after a jam session one evening.  We should do a Lonnie Robertson tribute album.  But instead of doing a full length LP, we should break it up into 4-6 tune EPs just like Lonnie did in the 1960's with his famous 45s.  Brilliant?!  Probably not.  Profitable?!  No chance.  Fun?!  Absolutely!

We went into this not wanting or trying to replicate Lonnie's playing or versions perfectly, only with hopes to do justice to the legacy he left behind in our own way.
This is our tribute to him and a few of his signature tunes. Half he wrote, half he simply made his own.

Give it a listen here and if you like it, please let someone who loves old-time music know about it.

Thank you to the fine folks that have already purchased our little project and look forward to hearing some feedback.

Note: this is a digital only release, there won't be any CD's printed at this time.