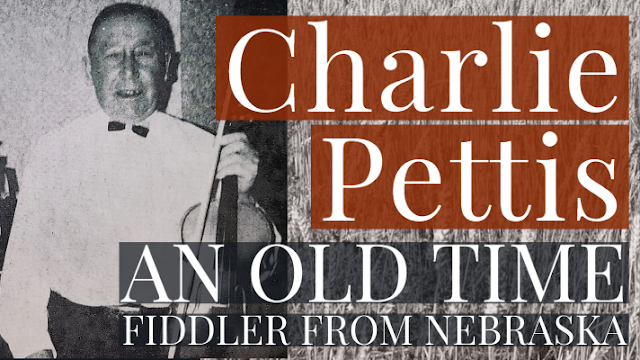 "Charlie Pettis of Anselmo, Custer County, Nebraska, was for me, a genuine surprise. Here was an accomplished fiddler, living two hundred miles west of the nearest other Nebraska fiddlers of any repute (Bob Walters and Ed Mahoney), and in an area devoid of old-time square dances, with no accompaniments in the surrounding locality. He had a substantial repertory of tunes for the ballroom in addition to a plentiful supply of traditional square-dance tunes.
Charlie mentioned on one occasion that an older brother had played the fiddle, and both were local natives. I am still puzzled by the isolated existence of this music in a location where, as far I could ever ascertain, there was no historical tradition of old-time fiddling or dancing. Charlie was playing for an occasional cowboy dance up in the Sandhills, but he told me those dance programs were all couple dances with a few waltzes." - R.P. Christeson, The Old-Time Fiddler's Repertory Vol. 1, 1973.

Have you ever just had some music on in the background while you're working and a particular tune catches your attention and you just have to stop what you're doing to just listen and take it in?  That happened to me as Charlie Pettis's arrangement of "Marie" came across my playlist one morning.  It was a "knocked my hat in the creek" moment and I've been trying to learn as much as I can about this Nebraskan fiddler since.
The first logical step (to me as an avid music collector) was to look online for available recordings.  Luck!  I found two from a record shop in Nebraska.  "An Old Time Fiddler from Nebraska, Vol. 1" and "A Saturday Night with Charlie Pettis, Vol. 2" are now part of the archives here at the farm!  I've recently discovered that he released three albums, so if anyone has that please let me know!
After looking online, through my books at home, I reached out online and had a few responses to help put a backstory with Mr. Pettis.  A huge thank you to Mr. David Brinkman who grew up in Nebraska and reached out to me with his account from the 1970's.

"I met Charlie Pettis at the Ainsworth, NE contest around 1975. I did not play fiddle yet at that time, but I have a vivid recollection of him playing Black and White Rag. I went home and learned it on banjo. Charlie was quite good, but my recollection is that he was not a hoedown specialist, so did not necessarily win contests."

Just today I've been receiving a lot of information from another online acquaintance, Mr. John Cotton, who's obviously a MUCH better researcher than I am.  Mr. Cotton gets a lot of credit here as he's shared with me tons of newspaper clippings and articles that help shine a light on this under recognized fiddler from rural Nebraska. 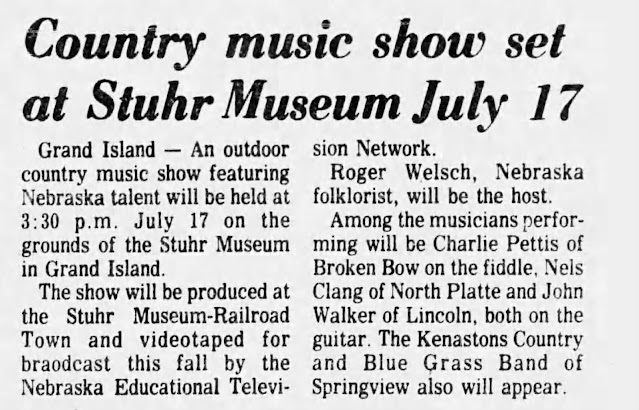 1973
As mentioned by Mr. Brinkman earlier and the short bio offered by R.P. Christeson, Charlie Pettis wasn't a square dance fiddler, he was a ballroom dance fiddler specializing in popular tunes of the time and waltzes.  His arrangements of these tunes show superior musicianship, especially for one that couldn't read music.  Several of the "pop tunes" on these albums have been transposed to keys better suited to the fiddle and parts arranged to better fit into what's expected of a dance fiddler.

Even if Mr. Pettis wasn't exactly a contest fiddler, he did come home with 2nd place and the award for "Best Liked Fiddler" at the 1st Annual Yankton, South Dakota Fiddle contest.
More to come on Harry Hanson who won first place in a future blog post.
I'm still looking for more information about Mr. Pettis's fiddling, that elusive third album, field recordings, and accounts from others who were familiar, anything at all.  So if that's you, please reach out to this fiddle nerd!

I have digitized Volume One and Two of Charlie Pettis's private press LP's.  By clicking the album covers below you'll be redirected to my cloud storage for download.  I have also compressed both into a .zip file for easier downloading on a desktop.  If you'd like that, click HERE!

Charlie Pettis was born June 5, 1900 to Aetna and Ellen (Milburn) Pettis, in a little sod house, one mile east of Milburn on the Spence Leep farm. Charlie was one of six children, two brothers: Frank (deceased) and Bill (deceased): three sisters: Myrtle Howard (deceased), Nellie Leep of Anselmo and Ellen Clang of Anselmo. His mother and father and two small brothers, Frank and Bill, Grandfather Jimmy Milburn and an Uncle Billy Milburn came to Nebraska from Michigan and settled in the community in northern Custer County, later to be named Mil burn, Nebraska. He attended Sandy Ridge School and worked as a hired man for neighbors.

Growing up at Milburn, he learned music and fiddling from his dad, the whole family had bows in their hands at one time or another. His mother could read notes or pick up tunes by ear, the family tradition goes back to his grandfather. Charlie loved remembering and telling about the times his mother sat him, at age three, in the middle of the bed with the fiddle so he could learn to play and not drop it. His love of music grew and by the time he was seven years old, along with his parents, brothers and sisters, The "Pettis Family Band" played for the enjoyment of people in sod houses, schoolhouses and the good old barn dances all over the country. In those days, the women brought sandwiches and cake, the little ones were put in bed and the older children played together. There was no way of transportation, so when you wanted to go, you went by foot. At a very young age, he taught his sister, Nellie, to accompany him on the organ and piano.

On September 18, 1920, in Broken Bow, Nebraska, Charlie was married to Agnes Dorothy Stithem. A double ceremony, with Charlie and Nellie (Pettis) Leep was celebrated. They were parents of five daughters: Freda, who died at age 23 months; Burnice married Cleve Dickinson (deceased) in 1977 and has four daughters, Burnice is now married to Everett Zierlien; Wilma Jean (deceased in 1961) married Kenneth Mason and had two sons and two daughters; Darline married Paul Daily and has four daughters; Eula Faye married Elver Anderson and has two daughters. There are fourteen grandchildren and 29 great-grandchildren, Charlie moved to Broken Bow in 1956 and was married to Alma Parker, July 11, 1957.

Charlie and Agnes were farm people and lived in the Milburn and Anselmo communities until moving into Anselmo in 1937. They operated a cafe in Anselmo for several years and later he worked with heavy equipment while building roads in Custer County. He also worked with the building of the Milburn Dam.

Charlie played piano, guitar, banjo, mandolin and drums, but his very first love was the fiddle. He could take one apart, make repairs for it, and it would sound like new. At age nine, he first played for dances and continued with his band in the early 20's. The members were: Nellie Leep, his sister, and friends, Glen Freeman and Lawrence Holmes. At one time, they had played together twenty-five years continuously. He had the honor of playing at hundreds of wedding dances, golden anniversaries and birthday parties, along with giving his time and talent to benefits, nursing homes and many special occasions. His love of music took him to many contests where he was awarded numbers of beautiful trophies, never lower than second place.

Charlie was a member of the Midwest Golden Age Fiddlers and Nebraska Association of Old-time Fiddlers. He was chosen to represent Nebraska old time fiddlers for the Smithsonian Bi-Centennial Folk Festival in Washington, D.C. in 1976. This was a great honor for him and his family. He was interviewed by R. P. Christensen, who published a short biography and two of Charlie's tunes in a book called "The Old Time Fiddlers Repertory" published by the University of Missouri Press. He made three albums which have been circulated all over the country.

A fascinating thing about Charlie was that he knew all the notes, yet could not read written music. His talent was so great that he could listen to a melody once and repeat it perfectly. He delighted in teaching young people to play. One of his students received honorable mention in National Geographic and won many contests all over the U.S. and Canada.

Charlie and Alma enjoyed camping and fishing. Charlie continued to work and play his music until his death, February 15, 1979. He was buried in the Broken Bow Cemetery.