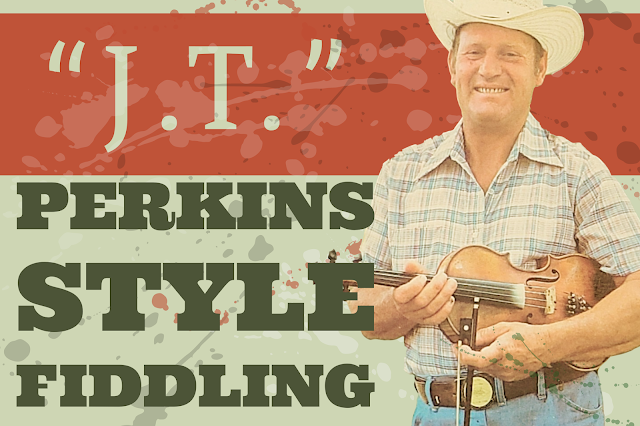 "I feel honored in being asked to write some lines about my good friend, J.T. Perkins.  Our acquaintance is comparatively short, but during these few years I have grown to admire this quiet man from Arab, Alabama.  His dedication to his fiddle music has helped him emerge as one of the best fiddlers in the USA.
I first met J.T. in 1970, a very casual meeting at Renfro Valley, the day following his first contest win there.   In Fact I did not hear him play as he was preparing to leave for home and I had just gotten there and was backstage following a Roy Acuff show in the old barn.  Several months later Dr. Perry Harris and I were in Athens, Alabama attending the TVOTFA Convention and while walking through the parking area Doc's ears perked up and he said "I hear someone playing a Howdy tune."  We found J.T. a few pickup trucks away doing a dandy job on "Rutlands Reel."  (He got around to playing another appropriate tune before we parted, "Doc Harris Hornpipe."
J.T. has won just about every major contest held in the Southeast during the past few years.  For example, he is one of only three fiddlers to have been crowned Tennessee Valley Fiddle King two times, and is also a two-time winner at Renfro Valley to name a few.  He was second-place winner of the prestigious Grand Masters in 1973, and performed at the Smithsonian Institution Folk Festival in 1976.
Although he has won many contests and is certain to win more, he cannot be classified as only a contest fiddler.  J.T. has not limited himself to old time tunes only.  Two tunes on this album, "Black Mountain Rag" and "Orange Blossom Special," are not often done by him.  When he does them, however, his versions are among (if not the) best as attested by this album.  Another description of J.T. is versatility.  He is capable of dipping into a Gimble swing, some Clements jazz or a hoedown of Howdy, with no break in musical quality.
J.T. admits that a great deal of his playing has been influenced by Howdy Forrester.  He played Howdy records and heard him on radio for years, but had never met him until 1972., when I was privileged to have these two in my home for their first jam session.
J.T. is backed up on this album by a fine group of musicians.  I have known Algie and Gerald Surratt all their lies as we attended the same high school, Cedar Hill, in northeast Mississippi.  Algie is the "premier" amateur guitar picker in the Southeast.  First place wins at contests throughout the south attest to this.  He was also to be a featured performer during intermission at 1978 Grand Masters Fiddlers contest at Opryland.  Gerald, one of the better amateur banjo pickers around, is self taught and accomplished a great deal while he mostly  "picks for fun."  Claudie Holt, guitar, and J.P. James, bass, along with Algie and Gerald, blend with the "perfection" artistry of J.T. to make this a well-balanced, well-prepared, and most important of all, a good-to-the-ear album."  -  H.G. Roberts, F.F. (Fiddle Fan)  Nashville, Tennessee

That's some HIGH praise printed on the back of that album sleeve.

I admittedly hadn't listened to Mr. Perkins much until the last few years whenever I happened upon this album through a bulk purchase of records and pure coincidence.  My longtime friend, Matt Wyatt, had studied with J.T. during his college years in Nashville and always spoke very highly of him.  For whatever reason I had never searched his music out, but I remembered the stories that Matt told about how inviting, and friendly J.T. was to new and upcoming musicians interested in his fiddling.

It was nothing but dumb luck that this album found its way to my house.  After shuffling through my boxes I laid this one to the side (on top of the pile) to listen to that evening.  After my sinuses had had enough of thumbing through old LP's this was the first one that I cleaned up and dropped onto my turntable.  Wow!  I listened through this album multiple times that night, that week, that month, and it's part of the regular rotation since.

I will note that I digitized this a few years ago with a mediocre stylus, and even then the final track on the B side wouldn't play without constant skipping.  So this particular download will be missing, "Orange Blossom Special."  This album was well loved before I came in to possession, (and with good reason), but I am hunting for a cleaner (less scratched) copy.

Click the album cover to be redirected to my cloud storage.  There will be TWO folders.  One is a compressed .zip file that contains the entire album (minus OBS) and the other folder will have individual tracks to download OR listen to online. 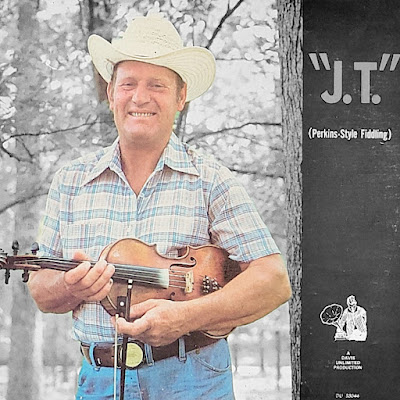 I truly appreciate everyone that follows this blog and supports my efforts here. There's a lot of hours after work, weekends, and a bit of money that goes into this blog and storage. I always enjoy getting feedback, stories, and whatever so please leave a comment or email me at - BrokenBowFiddleCo@gmail.com