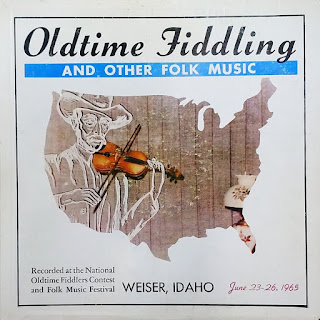 My record collecting has started to trend towards obsessive.  This means I spend a fair amount of time searching eBay, Discogs and digging at my favorite independent record store in Columbia.  A few weeks ago I ran across some new listings for LP's of past contests held in Weiser, Idaho.  For the ones that don't know, Weiser has been home to the "National Old-Time Fiddler's Contest" since the early 1950's and has drawn the best contest fiddlers in the country over the years.

I grew up hearing stories from my friends and mentors about how some of Missouri's best traveled to the north-west part of the country and did pretty well!  Cleo Persinger took home the championship in 1964, Cyril Stinnett brought the championship back to Missouri in 1966, and local folklore tells that Pete McMahan did well in the late 60's and ealy 70's.

This particular LP is from 1965.  I'm pretty sure they stored this album in between 2 sheets of sandpaper for the past 50 years, so there is prominent pops and noise throughout.  Tracks 1-17 are all fiddling, after that it's a mixed bag of varying musical tastes.

Click here ----> 1965 Weiser, Idaho National Oldtime Fiddlers Contest and Festival.
You'll be taken to the Google Drive file location where you can download the "high-quality" .WAV files with that pure, crackling analog warmth...  This should go without saying, but here it is - these recordings are provided as an educational source and a window into the past.

Enjoy this album and I'll try to keep updating this blog more over this winter. 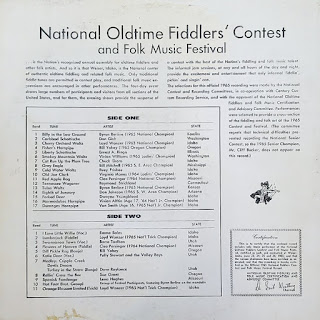