Spring (and winter every other week) has sprung here at the farm and even though the days are getting longer my free hours after work sure haven't gotten any longer!  As promised though with all of the generous donations towards our scholarship fund I'm keeping my end of the deal up for you all.  I've got a really special album for today and I am one LP closer to completing my collection of Lonnie's commercial recordings thanks to a very dear friend.
Several of my posts here on the site have been about Lonnie Robertson.  Even though I grew up in Missouri and have been immersed in fiddle music for over three decades I had never been properly introduced to his music.  One attentive listen to one of his albums a few years ago and I have been obsessed to learn as much as I can and to learn as many tunes of his that are within my skill level.
As I've said in previous posts here about Lonnie, I'm not a writer, I'm a poor historian, and much better folks have done all of the hard work and research for those of us that are thirsty for Missouri fiddling history (shoutout to Dr. Howard Marshall!).  Dr. Marshall has written about Lonnie on several occasions and most recently in his second installment of Missouri fiddling history published by the University of Missouri.
Buy "Fiddler's Dream" Here!
It isn't just me that thinks Lonnie was one of Missouri's most important fiddlers.  The great music historian, R.P. Christeson, after being introduced to his music by Uncle Bob Walters said he was, "the best Missouri fiddler I've ever heard."
Below is a scan of R.P.'s introduction to Lonnie's transcriptions featured in, "The Old-Time Fiddler's Repertory Vol. 2", published by the University of Missouri Press in 1984. 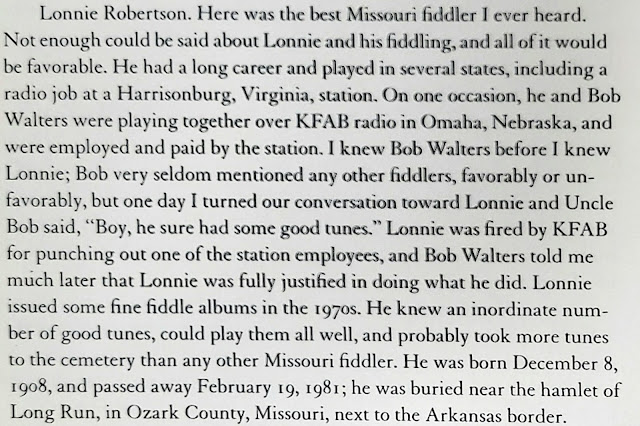 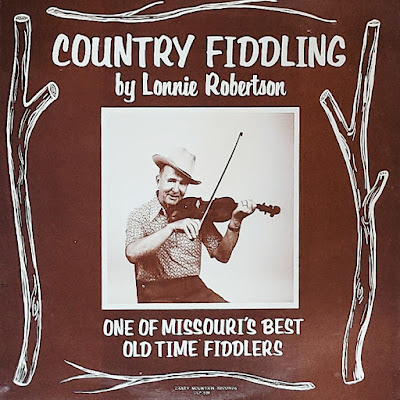 If you're enjoying these posts please think about throwing a few dollars to our scholarship fund that benefits the future fiddlers enrolled at Bethel Youth Fiddle Camp.  We've raised $200 so far and that is over halfway to paying the full tuition for one student this summer.  Think we can raise $150 by the end of the month and cover one tuition?!?

Thanks to everyone that has donated to the scholarship so far. Y'all are making a dream come true for some lucky kid!
I truly appreciate everyone that follows this blog and supports my efforts here. There's a lot of hours after work, weekends, and money that goes into this blog and storage. I always enjoy getting feedback, stories, and whatever so please leave a comment or email me at - BrokenBowFiddleCo@gmail.com.
Thanks!
John P. Williams