Most everyone that follows me on this niche corner of the internet knows that I have a large interest in Missouri fiddler, Lonnie Robertson.  Some would say, and have said, that I'm borderline obsessive in collecting his commercial and home recordings and making them available online to "spread the good word".

(Most of what I do have in my meager collection is readily available through the Missouri State Old-Time Fiddler's Association page on BandCamp so please hop on over there and give them some support and download some good tunes!)

There's no great nor grand story as to how I was able to get this record.  I just happened to be up way too early on my day off scrolling eBay before anyone else found this gem.  I've lost countless bidding wars the past couple years for this particular LP.

I'm not a good writer, historian, or journalist so there's nothing I could write here that hasn't already been written better by much better folks.  Dr. Howard W. Marshall has written about Lonnie on several occasions and most recently in his second installment of Missouri fiddling history published by the University of Missouri.

Howard was just telling me today about the importance of liner notes and the absence of such in this new age of recordings.  There's so much history that is written on the backside of these old LP sleeves.  More often than not this is all that us amateur music history nerds have to go on when we catch a fever and start trying to learn everything we can.

don't ever tell him I said he was right about anything though.  thanks.

Here are the liner notes, verbatim, written by Don Harvey of AM radio fame.

"It's a real pleasure for me to be able to make this little written introduction for Lonnie Robertson, because I have had the pleasure of working with him for a number of years now . . . and I know that he is the kind of fellow you'd want for a friend.

Lonnie was born at Long Run, Missouri on January 8, 1908, and his parents, Jarrett and Martha Robertson, were mighty proud of their bouncing boy.  He bounced to music, because his dad was a fine old-time fiddler.  Young Lonnie grew up just as most kids do down here in the Ozarks . . . fishin', huntin', swimmin', and doin' the chores.

When Lonnie's dad passed on, Lonnie inherited his fiddle and started to play it for barn-dances around the countryside.  He soon moved to St. Joseph, Missouri and took a job at a packing plant, but kept right on playing the fiddle in his spare time.  It was in St. Joseph that Lonnie landed his first radio job which was a regular, sponsored Sunday afternoon program on KFEQ and the folks up St. Joe way really went for it.  Then along came the depression and Lonnie was layed off at the packing plant.  The Sunday radio fiddling job just didn't bring in enough to feed a sturdy guy so Lonnie wrote to radio station WNAX in Yankton, South Dakota, offering his services as an old time fiddler.

Well.  Lady Luck was smiling on this Ozark boy and back came a wire . . . (the first one Lonnie had ever received, by the way) . . . saying . . . "come on".  The Robertson Ozark brand of fiddlin' quickly took hold in the North Country and the mail came pouring in, saying. . . let Lonnie play more tunes.  It was in Yankton that Lonnie met Roy McGeorge and we'll tell you more about him later . . .  but now, on with our story.  Lonnie even at this late date, wasn't sure that radio was what he wanted to do . . . so he decided to take a little flyer in the grocery business and headed back to the Ozarks.  He bought a grocery store in Brookline, Mo. and set up store keeping.  But the call to the microphone was too much for him and after eight months behind the counter, he got in touch with Roy McGeorge, who had wandered back into Pennsylvania, and the popular team of Lonnie and Roy came into being.  They headed back for Lonnie's old stomping grounds and landed a job at KFEQ in St. Joe.  After a year there, station WAAW at Omaha, Nebraska offered a better contract and they sang songs for the Nebraska folks.  Lonnie's fiddle was really making friends and drawing mail by now and it wasn't long before the boys moved over to KFAB, Lincoln, Nebraska where they stayed three years.  Somewhere along the line, Eatherham Hobbs joined the act . . . and though a lot of you folks may not believe it. . . Eacherham and Lonnie are the same fellow . . . just like Charlie McCarthy and Edgar Bergen.  After three years at KFAB, the act had made a coast-to-coast reputation and Lonnie and Roy were offered a fine contact to make transcriptions for the Texas Network which they accepted.

After they were finished, Lonnie decided Kansas looked good to him and joined the staff of KOAM, Pittsburg, Kansas . . . (I met him there), where Lonnie was the head-line entertainer.  But remember, all radio folks move around a lot and later on came a profitable offer from station KMA in Shenandoah, Iowa and he moved again.

Hey, wait a minute, I forgot to introduce you to Lonnie's charming wife.  Her name is Thelma and she was born in Theodosia, Missouri only about seven miles from Lonnie's home.  (She's the daughter of Mr. and Mrs. Jack Jones).  Lonnie and Thelma have one son, Jarrett Robertson.

Lonnie and Thelma moved from Shenandoah, Iowa to Spring, Missouri where they spent three very successful years.  They then moved to the hills of Old Virginia where they worked at WSVA, Harrisonburg, for one year.  After this, they moved to WDZ, Tuscola, Illinois where they spent another prosperous year.  They have since then returned to the Ozarks where they were members of the KWTO staff for a number of years.  Lonnie is now retired but is active in fiddlers' conventions and places regularly in fiddlers' contests.  He and Thelma now live in Spring, Missouri."  -  Don Harvey (Radio Announcer)

"I especially want to thank Gary Silkwood of Chillicothe, Missouri, for being my guitar accompaniment on this album." - Lonnie Robertson 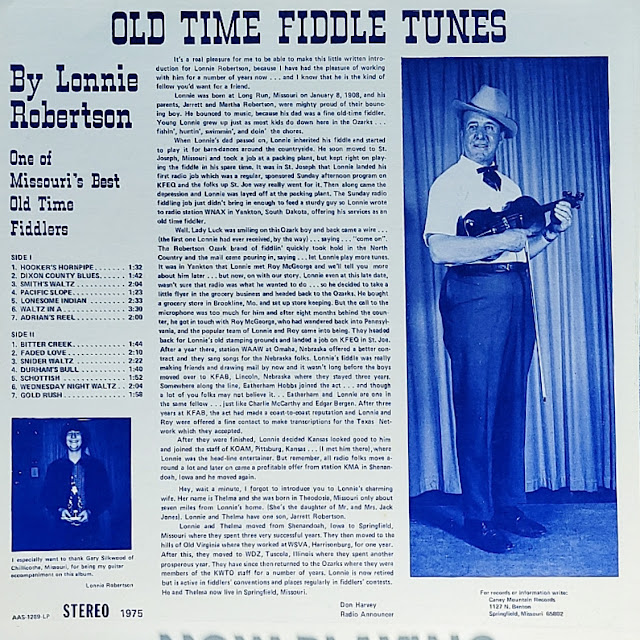 If you've stuck with me this long you're committed and ready to listen to some great Missouri old-time music from Lonnie Robertson.  Click the following link for the .zip file!

Thanks to everyone that's helping preserve this tradition that is so dear to our hearts.

I always appreciate feedback, stories, whatever!