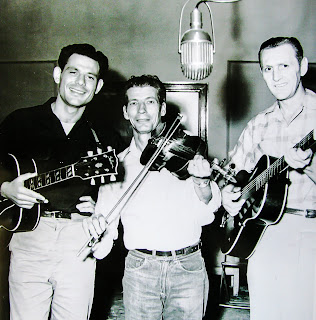 Sometimes you just happen to be in the right place at the right time and sometimes some of the greatest things come to you when you're least expecting it.

Last week while I was teaching at the Bethel Youth Fiddle Camp that very thing happened to me.  Whether it was good fortune, happenstance, or dumb luck I'm forever a better person after becoming acquainted with and spending time talking with Mr. Ray Smith, a local farmer from outside of Bethel, Missouri.  Ray had mentioned to me that his "Uncle Benny" was somewhat of a fiddle player back in his heyday, wrote a few tunes and had the personality to match.  Ray told me that he'd recorded his Uncle Benny in the late 1960's or early 1970's in his kitchen in Ballwin, Missouri on a reel-to-reel and had since converted it to digital.  Being an avid collector of fiddle music, especially Missouri fiddling I couldn't wait to hear it. Boy, was I in for a surprise. As they say, it "knocked my hat in the creek" when I heard the first tune.  Come to find out Mr. Prewitt was a well known square dance fiddler, entertainer (of KOAM-Pittsburgh, Kansas radio and television fame) and composer.

I'm not a master historian and could never give, Ben "Shorty" Prewitt, the justice he deserves.  What I can say is that Prewitt was one of a kind, talented, and master of the fiddle.  Let's hope that this little known fiddler from south Missouri gets the acknowledgement he deserves in the coming years.

Thanks to Dr. Howard Marshall for providing the picture from KOAM in Pittsburgh, Kansas and for helping me fill in the gaps on Shorty's story from his own diligent research.  And a million thanks to Ray Smith of Bethel, Missouri for giving me this never before heard home recording with me to share with everyone.

Feel free to share this blog post and this recording so that Benjamin "Shorty" Prewitt's music and compositions continue to live on.